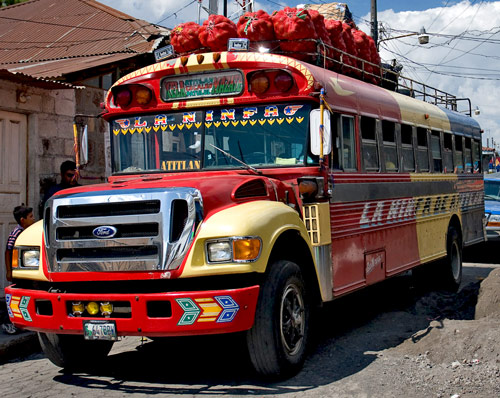 Bus to Lake AtitlanThis is a standard issue Guatemalan bus. It was once a US school bus, but has had the seats repositioned and more added because the locals are smaller than American school children and more seat means more fares. Inside the bus, there is normally a couple of tourists crammed in amongst 50 machete wielding locals and a number of livestock. The bus will not depart until it is full, so expect a wait at the bus station. It will then proceed to speed its way to its destination, pulling off deadly overtaking manoeuvres on winding mountain roads whilst a man hangs from the side waving cars out of the way. Eventually, you will reach the town it is destined for, and you might think you made quite good time, however, the last mile will be punctuated by 50 stops as each person on the bus gets let out exactly where they want to get of, even if it is only a dozen metres from where the bus last stopped.

Most people will tell you not to risk your life on them as you will occasionally see one on the news that has fallen of a cliff and killed all onboard. But, you would actually be crazy not to use them as they are cheap and extremely exciting and there is little alternative anyway. The death toll versus journeys travelled is much the same as driving on a long flat motorway in westernised countries, so don’t be too alarmed. Also, as you can tell from the beautiful paintwork and masterfully polished chrome grill, this bus is a piece of art and the driver will lose a month’s pay if he gets so much as a scratch on it.