W0084: Eastern BallcourtThere are three ball-courts, or Teotlachtli, at Xochicalco: one to the north; one to the east; and one to the south. The reasons for having three courts is unknown – as are the rules of the game, the importance of the courts and the and the purpose for building them in different sizes and styles. Carvings, paintings and models of the game that have been uncovered, indicate that the game was played by two teams of 1 – 4 players, who stood at either end of the court with markers mounted on the wall or planted in the floor to divide the court in two (a marker is visible midway along the far wall in fig. W0084 and a fallen ring is visible on the floor of the northern court in fig. W0091). The game was played with a large and heavy rubber ball – about the size of a man’s head – and the aim of the game appears to have been simply to keep it bouncing and hitting it back and forth, with the sloping walls helping to keep it in play. Because of the weight of the ball, the only way to hit it with any force without breaking any bones was to use the hip, which was well protected by a thick leather belt – arms and legs may have been used to control the ball prior to hipping it back down the court. . 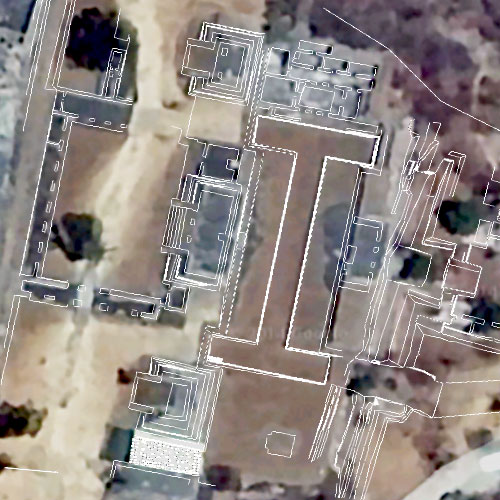 W0085: East Complex Map In most cities the ball-courts are found within the ceremonial heart of the city. At Xochicalco, the eastern court has been aligned with the Central Plaza and lies at the heart of its own ceremonial compound known as the Eastern Complex. From above (see fig. W0091), it is quite clear that the Eastern Ballcourt is surrounded by plazas, pyramids, temples, baths and preparation rooms that were built to service the ball-court and its rituals. Whilst the drama and spectacle can be likened to that of the Gladiatorial arenas of Roman Europe, the context and result of the game was deeply religious, with the game being symbolic of the battles played out by the gods of the cosmos. The game was often often used to settle disputes because the winners were deemed to have won by divine right. 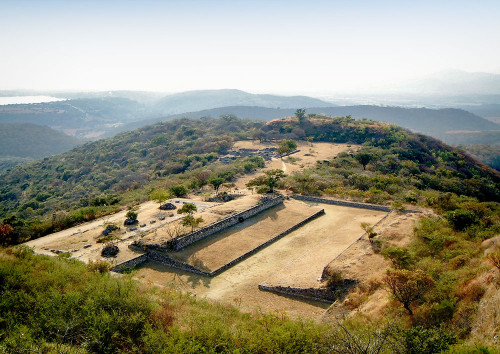 W0084: Eastern Ballcourt The Southern Ball-Court at Xochicalco is virtually identical to the Eastern Ball-Court and similarly sits within a dedicated area. The Southern Ball-Court runs east-west and is aligned perfectly with the Plaza of the Two Glyphs, which may have served a very different purpose to the main Central Plaza, and have even been an older part of the city.  It looks as though there was once a viewing area built into the hillside that leads down from the Plaza of the Two Glyphs and there is also a large porticoed building running along the southern wall of the Ball-Court. To the west of the Ballcourt is an unusual series of low circular platforms or altars, which number 20 – one for each day of the sacred calendar – and may have been related to rituals relating to the Ball-Court. 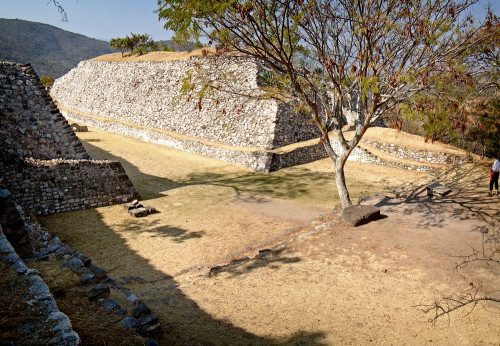 W0091: North Teotlachtli (Ball-court)The ball-court to the north is the most interesting of Xochicalco’s three teotlachtli because it features a less familiar design, with high walls and very narrow ramp. This design is almost identical to that found at Monte Alban – a city that is similarly sprawled across a high hilltop some 200 miles south east in the Oaxaca Valley. Curiously, evidence of a connection with Monte Alban and the Zapotec culture has also been found within the buildings and inscriptions of Xochicalco’s Central Plaza, and the in particular the Temple of the Stelae. 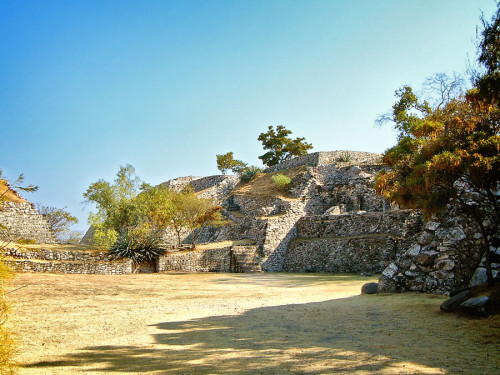 W0093: The central plaza’s foundations west of the North Ball-courtThe Northern Ball-Court is also different in the way it doesn’t appear to be part of a complex and instead appears tacked on beyond the northern perimeter of the ceremonial core. It even utilises the Central Plazas foundations as its southern wall (this is sadly obscured behind the trees in centre-left of fig. W0091, although you can get a feel for how the foundations work around from the plaza with a similar hight and slope to become the southern wall of the ballcourt, whose northern wall is visible sloping in from the left of the picture). Today, the Northern Ball-Court is part of a thoroughfare that leads from the Eastern Complex around to the Observatory and it seems likely this was the case during antiquity. It is not uncommon for ball-courts to have functioned as passageways (other examples are found at El Tajin and La Quemada), which suggests they may have been considered part of a symbolic journey during some rituals. With the courts seemingly aligned to celestial observation, and the game thought to be symbolic of keeping celestial objects “bouncing” around the universe, it is quite plausible that the courts were perceived to be celestial corridors with supernatural powers and therefore became part of ritual processions and not simply sporting arenas.

Therefore, it seems that Xochilcalco’s three courts were built for three different purposes. The Eastern Ballcourt was certainly the main arena, where an entire complex was built to host games and rituals as a spectacle for Xochicalco’s dignitaries. The Southern Ballcourt appears to have been dedicated to rituals surrounding the sacred calender. Whilst the Northern Ballcourt may have been symbolic of the Ball-Court of Xibalba and used during ritual processions to the underworld (symbolised by the caves and observatory located just beyond the court).