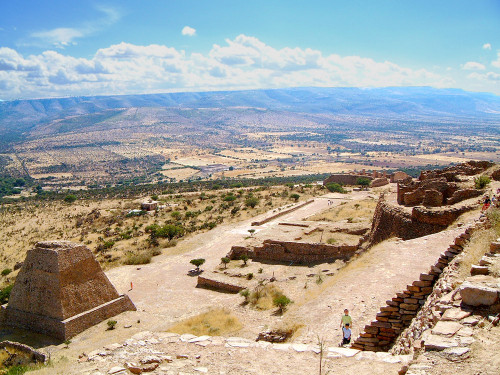 W0159: The El Cuartel complex is far right, on the round base The Cuartel compound at La Quemada was thought to be a  barracks after excavations during the 1960s uncovered evidence of residential living – in particular burnt hearth stones and metates (grinding stones). At the time, La Quemada was believed to be a citadel that had been built by the Toltec or Aztec during the Early Post Classic Era (900-1200AD) to protect the border and control trade. Therefore, these living quarters were presumed to be for the garrison that manned the outpost. However, grains of domesticated corn found during subsequent investigations amongst the detritus excavated from the Cuartel area, combined with research from the surrounding environment and villages, demonstrates that La Quemada was at the centre of an agricultural community and was not simply a fort or trading outpost that received its supplies remotely.

Further archaeology has discovered that the earliest expansion of the second tier, on which the Cuartel is situated, began between 300AD and 400AD – much earlier than previously thought. Between 650AD and 900AD, the Cuartel was two stories high, with the first storey functioning as sleeping quarters or a rest area and the second level, where plant debris, domestic pots, and flaked stones (used for cutting and slicing) were found, was presumably a terrace where food was prepared. Between 900AD and 1200AD, a third level was added that was constructed from adobe brick. This latest level seems to have been added as a purpose built observatory as it faced east to the sunrise and provided an unparalleled vantage point to view the horizons. 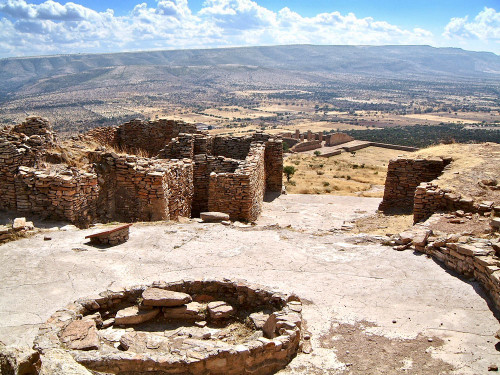 W0160: View of the Cuartel Complex (right) from the Patio Circular
With the Cuartel’s purpose shifting to that of a religious compound and observatory, researchers investigated further and discovered that the central room of the Cuartel was designed to be illuminated on the solstice and that the original structure was also probably designed for ritual purposes. Also, with three stories the Cuartel would have clearly been integrated with the sacred spaces known as the Patio Circular (Circular Patio) and the Conjunto Pirámide-Osario (Pyramid-Graveyard Group), where the remains of 250 sacrificial victims were found.

The results of the investigations around the Cuartel have brought about a very different opinion of its use – and indeed the function of La Quemada as a whole. It now seems most likely that La Quemada was a ceremonial and political centre for the surrounding villages and that the Cuartel housed La Quemada’s dignitaries and staff. The compound provided them with an observatory from which they could track celestial portents and a shrine for making the necessary offerings to (most of which would have been foodstuffs prepared in the Cuartel, although clearly human offering were made later on – read the article on the Conjunto Pirámide-Osario for more info).