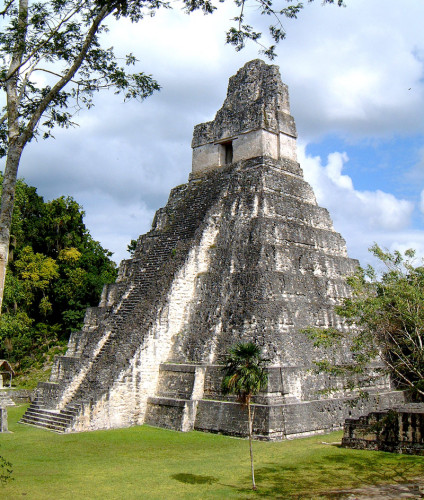 Templo IThe Temple of the Jaguar (Templo I) is probably Tikal’s finest and most dominating monument, with its nine tiers representing the nine levels of the underworld and raising its temple to an imposing 37 metres above the spacious central plaza below. The architectural style typifies monumental Tikal with its steep sloping tiers (taluds), topped with a triple chamber temple and majestic roof comb. Templo I was built in around 732 AD and signified a break from the traditional funerary building within the adjacent North Acropolis.

The temple is commonly called the Temple of the Jaguar because of an exquisitely carved lintel found in the temple structure on top of the pyramid, which was made from sapodilla wood and depicts a king sat upon a jaguar throne.  The temple has been also been dubbed the Temple of Ah Cacao, following the discovery of a burial within the pyramid structure of a ruler identified as Jasaw Chan K’awiil I. In an identical fashion to that of Pakal at Palenque, Jasaw Chan K’awiil I’s tomb was built and then the temple was erected around it, leaving the king encased within the fabric of the temple. The tomb featured a large masonry bench on which the king was laid to rest covered in jade jewellery and the chamber was filled with funerary goods, including spondylus shells, pearls, mirrors, jaguar skins, jadeite objects and painted ceramics. A set of 37 finely carved human bones were found piled at the king’s right foot. The bones were inscribed with hieroglyphic texts which described allegiances with Copan and Palenque, the king’s name and parentage, a portrait of a captive called Ox Ha Ixil from 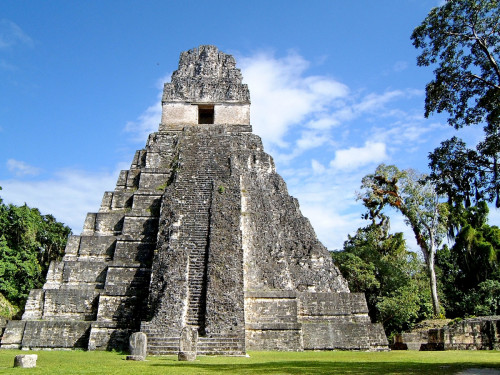 Templo Ithe enemy city of Calakmul and scenes of the maize deity being carried to the underworld on a canoe.

The striking decorated crown that rises from the roof of the temple is called a roof comb. Roof combs are common at Tikal and comprise of two framework walls leant against on another, faced with carved stone and covered with stucco (plaster). The roof comb on the Temple of the Jaguar featured an image of the king flanked by scrolls and serpents.

3 thoughts on “Tikal: Temple of the Jaguar (Templo I)”