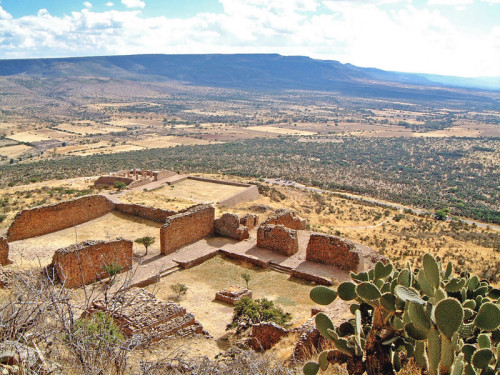 W0171: Sunken Patio on Level 3The third level of La Quemada’s site core features one of the largest terraces found at the site. The platform was configured as a major ceremonial complex, with a a large sunken patio that features a stepped altar at its centre and is flanked on east, west and south sides by roofed temple structures (fig. W0171). The largest of these structures is on the eastern flank and is almost equal in area to the Hall of Columns.  It is thought that this building may once too have been colonnaded in the same way as the Hall of Columns, but with wooden posts. Indeed, the buildings are visibly very similar and when seen from above, it is quite clear that the precinct on Level 3 and that of the Hall of Columns are closely related, with the two large sunken patios and their eastern temples clearly aligned with one another in the slightly odd off-axis alignment that the whole site is configured to. The relationship between the two patios appears to be further emphasised by the ability to trace a single line-of-sight through the hypotenuse of the upper patio (on level 3) that continues seamlessly through the hypotenuse of the lower patio (outside the Hall of Columns). This view is achieved by looking down on the two complexes from La Quemada’s fourth level, which is accessed from stairs behind the sacrificial pyramid (see fig. W0171). 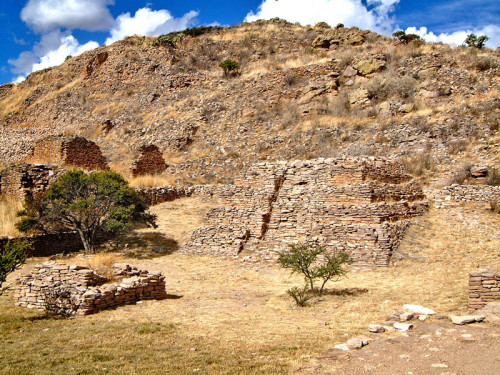 W0172: Piramide de los Sacrificios The north flank of the Sunken Patio features a small stepped pyramid with sloped walls, known colloquially as taluds.  This small pyramidal structure is known as the Pirámide de los Sacrificios, or Sacrificial Pyramid. During maintenance work carried out in the 1970s a statue was found of a decapitated lady with a child on her back, which suggests that the pyramid was linked to sacrifice in some way. Throughout La Quemada, large deposits of disarticulated human skeletons have been found and there is substantial evidence to suggest that larger bones and skulls were tied to the ceilings and walls of buildings. From extensive evidence found at cities across Mesoamerica, plus the pictorial evidence provided by codices (Mesoamerican books) and written accounts made by the first Spanish colonists, it is known that human sacrifices were normally carried out at the top of pyramids with the bodies discarded down the stairs. The arrangement of the ceremonial complex on Level 3, combined with the statue that was found, suggests that this diminutive pyramid the most likely place for human sacrifices to have been carried out.