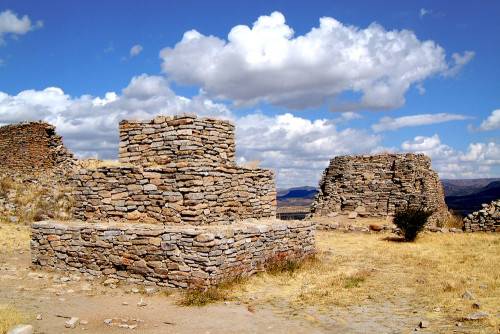 W0163: Altar of La Ciudadela  La Ciudadela compound at La Quemada was given its name because of its defensive location high upon the hillside, the fortified walls that enclose it and the difficult access to the complex. However, archaeology has revealed it had a religious function and was also used as a equinoctial clock. The complex consists of two structures: a walled courtyard with a three metre tall stepped pyramid and an altar at the centre; then a roofed building to the north which featured three windows overlooking the Malpaso Valley and a circular hearth at the centre. Excavations uncovered a masonry box at the top of the pyramid which contained a human burial with more than 100 pieces of turquoise, several receptacles and a ceramic pot. The burial featured an amputated leg and is thought to be associated with Tezcatlipoca, a major deity of the Mesoamerican cultures who was associated with many aspects, including the night sky, jaguars and war.

The configuration of the Ciudadela complex is such, that at dawn on the 21st March a beam of light passes across the pyramid and altar to the north-east corner of the courtyard. Other reports suggest it is aligned to the solstice also.  What is certain, is that the view from La Ciudadela is immense, with a 360 º view of the entire valley and clearly defined horizons formed by the low flat mountain ranges to the east and west. The complex is an ideal location for tracking celestial events, night and day, and this was certainly its function. The Cuidadela complex is thought to have been built in the 8th century, which was very late on in the building of La Quemada, and therefore had a very short period of usage.